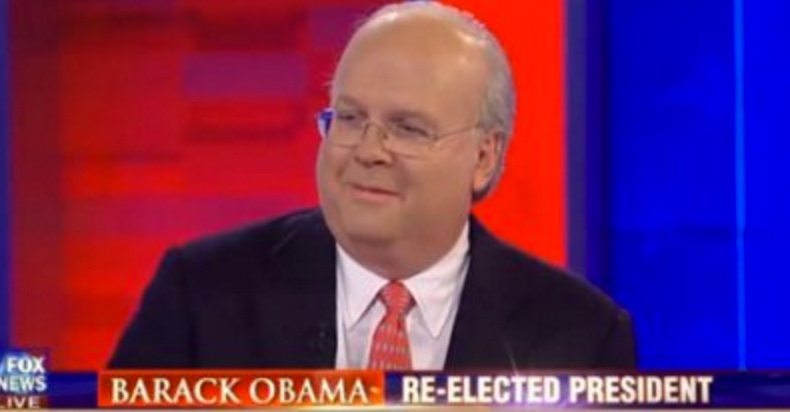 As any true, blue-blood Democrat, I can’t stand Karl Rove. I think that he’s a slimy, evil weasel. However, of the many insults that I have heaped on him, “stupid” has never been one of them.

Let’s not forget that this is the guy who got George W. Bush elected twice, despite that by 2004 voters knew that he had lied about Iraq’s weapons of mass destruction. Even if you believe, like me, that Bush’s win in 2004 had less to do with strategy and more to do with Rove’s voting-machine tampering in Ohio, he still deserves credit—the unpatriotic, criminal kind— for having pulled it off.  “Bush’s Brain,” Dubya’s top-notch strategist has been described as brilliant and is, undoubtedly, well-versed in the electoral process.

This is why when I first heard about and then saw his reaction on Fox News over the network’s Ohio call for President Obama, I didn’t buy what many have described as a meltdown. Rove’s past in the Bush administration and his current role as Republican rainmaker demand that he be an expert on the battleground states’ counties and their demographics. There is no way that he didn’t know that the votes that were still pending in Ohio were going to come from heavily-Democratic areas. Therefore, by insisting that Ohio could not be called, I thought that he was just putting on a show, a ploy, to buy the Romney campaign more time. Perhaps just the time needed for a bit of voting-machine manipulation à la 2004.

But, I have watched the Fox/Rove segment several times now, and I have come to the conclusion that Rove did have some kind of an authentic freakout. Granted, Rove’s freak-out amounted to a bit of stammering, scattered voter-number mix-ups, half-smirks, and  a lecture to Chris Wallace on prematurely calling states in Presidential elections. But, let’s face it, that’s as much emotion as one can expect from him, a cold-blooded, calculating, heartless, shell of a man.

Nevertheless, if  “Bush’s Brain” became stupid on Fox and did indeed believe his own BS, if he, along with the GOP’s intellectual brass, believed that Romney was going to win (despite the electoral vote projections) and that they really are “the good guys” (as Rove calls the Republicans), then we are in a completely different ball game than I thought.

You see, with the exception of Tea Partiers and/or really dumb Congress people (like Michele Bachmann), I thought that the top echelon of today’s GOP were cynical opportunists who believed in nothing but power. Romney is an excellent example of this type of profile, flip-flopping back and forth on his positions to suit the audience and the timing of the campaign.

Karl Rove, himself,  is another example. According to The Atlantic, even though Karl Rove’s father was gay, and “Rove not only knew his father’s sexual orientation but also was comfortable with it…”  he, “…guided the GOP into anti-gay wedge politics in the last decade (the Christianists, he coolly calculated, had potentially way more votes for the GOP than gays and their families).”

Opportunists can be persuaded to adopt new positions if those positions can be worked to suit their goals. For example, the desire to keep control of the House in the 2014 midterm elections, could influence the GOP to work with President Obama these two coming years. But if instead of opportunists, the core of the GOP is made up of ideologically-entrenched, delusional leaders, then it will be extremely difficult, if not downright impossible, for them to work in a bipartisan manner. Ideologues don’t compromise. They believe that only their positions are the right ones and that everyone else must come to accept them.

The truth about Rove’s Fox freak-out is that it’s more about us than it is about him. We should be really freaked out that those who are supposed to represent the intellect of the Grand Old Party are just a tad smarter than the nut jobs.