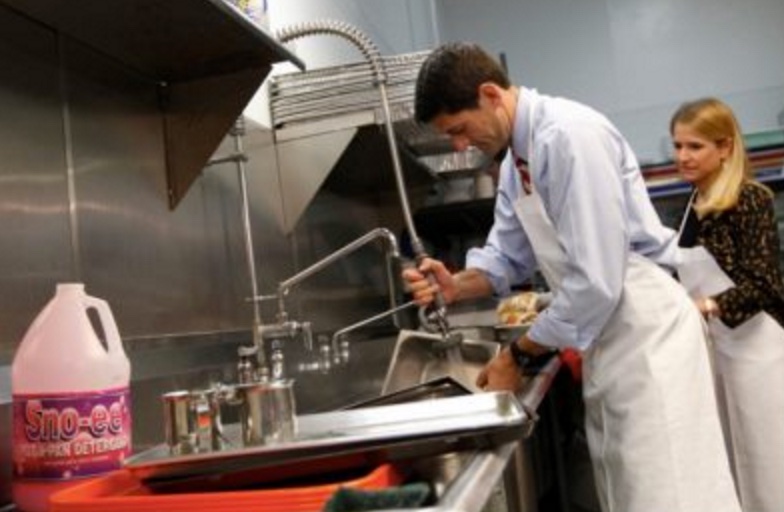 I don’t know about you, but I’m still flabbergasted about the Paul Ryan’s soup-kitchen-dishwashing-story, that surfaced two days ago.  Paul Ryan and his family  stopped for 15 minutes at the St. Vincent De Paul Society in Ohio and washed dishes on their way to the airport.

1. This was a staged photo (and video) op that took place without authorization from the charity’s president, Brian Antal.

2.  Most of the soup kitchen patrons were gone at the time of Ryan’s visit.

3.  According to Brian Antal’s original claim, Ryan washed pans that were already clean.  Later on, he said that they were dirty.   Yes, Ryan would be a real jerk if those pans were indeed clean.  But clean or dirty, let’s not forget the main issue here.  This was staged!

This is how Juanita Sherba, the volunteer who gave Ryan access to the kitchen  saw it, “It was the phoniest piece of baloney I’ve ever been associated with. In hindsight, I would have never let him in the door.  They couldn’t have cared less.”

Why did Ryan do this?  Why did Ryan feel the need to wash dishes instead of just taking a few photos with the homeless?  His campaign claims that he wanted to “highlight the work of the soup kitchen volunteers.”  I guess that makes sense, since Ryan’s “Path To Prosperity” budget  is going to result in a lot more people having to volunteer  in order to make up for all the government services that he wants to cut.

But in the end, this is just another pig-wearing-lipstick story.  Ryan may don an apron and wash dishes in a soup kitchen, but his ideology and his policies are still hogwash.