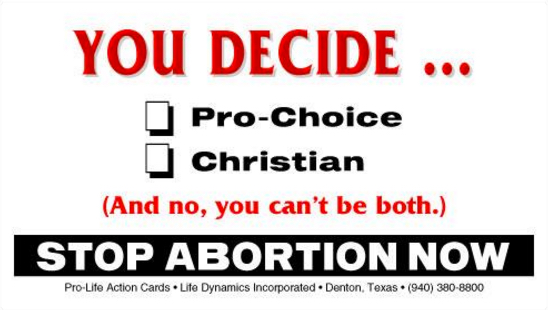 The above image is so wrong. I bet you anything that Jesus Christ was pro-choice. It’s simple, he was the son of God, and God gave us free will.

As I understand it, free will means that we have the right to make our own decisions. If God, the most Supreme Being, gave us this right and even put a tree in the Garden of Eden— that He knew would result in Adam & Eve going against His will—then we can safely deduct He was pretty serious about letting us choose our own path.

I’ll stop being irreverent to turn to the term pro-life. That’s a pretty impactful name. It’s too bad that it’s so misleading. As I see it, a person who is pro-life should not believe in the death penalty, or in wars, and should believe in gun control. I find that too many of those who call themselves pro-life believe in capital punishment and are anti-gun-control warmongers. This is incomprehensible to me.

As you must have guessed, I am pro-choice. But, I am also a mother. I know what it’s like to feel life inside my body and to bring life into this world. I understand the strong feelings of anti-abortion advocates who believe that abortion is killing a baby, especially if the abortion is done later rather than sooner. This is why I think that all abortions should be done as early as possible in the pregnancy. In fact, I believe that every woman should have the over-the-counter, morning-after pill in her medicine cabinet in case of rape or unprotected sex.

The morning-after pill is not RU-486, otherwise known as the abortion pill, which terminates a pregnancy (that is, after the fertilized egg has attached to the wall of the uterus and begun to develop). But even this pill, administered very early in the pregnancy, would be a good alternative to later-term abortions, in my opinion.

You see while I can understand the anti-abortion camp, I also understand, and share, the position of those who strongly believe that no one has the right to tell a woman what to do with her body.
If our country were less divided, if extreme factions in both camps would be silenced, it would be more possible to find a compromise, as many other industrialized countries have successfully done.
But the real problem  is that those who call themselves pro-life are not just anti-abortion, they are pro-control (government and/or religious organization decides), pro-judgement (if you mess up, off with your head), and most of all anti-choice. When a “pro-lifer” calls a “pro-choicer” a murderer, it is clear that we have a long way to go before we can even begin to listen to each other. This is a shame.
It is ironic that  a country who was founded by people escaping from religious intolerance can have so many intolerant people.