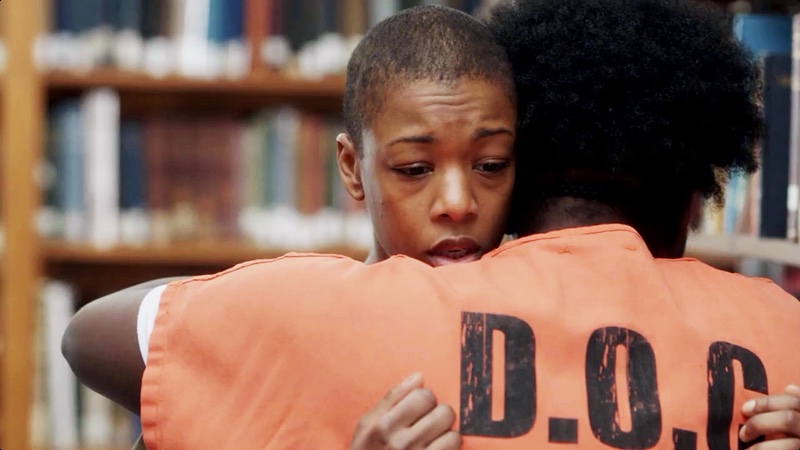 We just had the Republican convention which, in my opinion, was quite horrifying.  I thought that binge-watching Orange Is The New Black would make me forget the horror. Little did I know that it would end up highlighting it. Let me explain.

But before I do, let me just say it. I love this show. It gets better each season. But this last one, season four, is beyond good. It is relevant. I’m assuming that you’ve already watched it. After all, it was released over a month ago on June 17. So, I’m not warning you about spoilers.

Let’s begin. How do I love Orange Is The New Black? Let me list the ways:

Let me stop here and write a bit about OITNB’s writing although I don’t even know where to start. When I first started watching the show, I thought that I would be watching Piper’s experience, trauma, growth. I never expected to understand, much less like, the other inmates. Orange Is The New Black does something that is very rare in television shows, especially those dealing with crime. There are no good and bad  gals. Almost anyone and almost everyone can be good or bad depending on the moment and circumstance. I say “almost” because the exception to this was Poussey, which is why what happens to her this season is so devastating. More on this later.

The brilliance of this show’s writing is ever present but confirmed at key moments. The flashback to Crazy Eyes’ job at a Walmart-like store, where she checks off items on a customer’s receipt and in her cart: a couple of food items and an AK rifle. If this scene doesn’t convince Americans of the stupidity of our gun laws, I don’t know what can.

Later, the tragic revelation that her reason for being in jail is that she wanted to play with her friend who was a boy. A boy who understandably didn’t understand her manic behavior, and who fell to his death in his attempt to flee from her.

Another one is Poussey’s flashback to her night out in New York where she is separated from her friends, meets two drag queens, goes to the coolest club ever, and then is given a ride by a bunch of monks on bikes who turn out to be improv actors. This last episode is just magical. I felt that I was watching a dream, especially after the nightmare of the previous episode where Poussey is accidentally killed by the nicest guard in the prison.

At first, I was outraged, then terribly sad. Poussey was my favorite character. I have since learned that she was everyone’s favorite character. I have also learned that she was sent to jail for having a small amount of weed on her. So unfair, yet so true to what happens in real life. The unsaid is that because she was black and had weed on her, she was judged harshly. She was misjudged. The fact that she grew up in Europe, spoke several languages, was a decent person who had been in Amsterdam (where weed is more common) before coming to the U.S., all that was painted over and ignored because of the color of her skin.

But nothing can be more tragic than her death and the way that she died, pinned down by a panicked guard who also saw nothing more than the color of her skin. Again, the relevance to what is happening in our country today, to #BlackLivesMatter is undeniable. I hated that Poussey died, but I understand why the show’s writer thought that it was necessary.

Finally, let me explain the connection I made between Orange Is The New Black and the Republican convention. The show puts on display everything that is wrong with our current criminal system and with a mentality that is divisive, punitive, and gun-loving. In other words, the mentality held by most in today’s Republican Party.

Watching the divisive speeches at the convention while claiming unity, watching a crazed crowd chanting “lock her up” in reference to Hillary Clinton, hearing President Obama’s positions being so shamelessly distorted, seeing a crowd clap the shooting of a black man by the police, I was deeply disturbed.

I was also deeply disturbed watching Orange Is The New Black, but it’s just a show. Right?