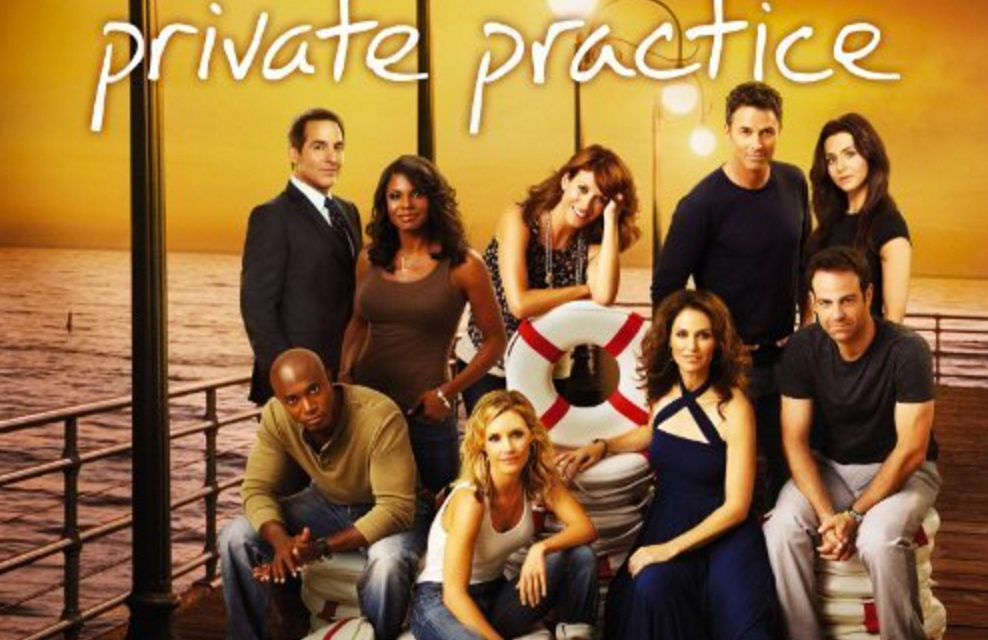 I’m on a Private Practice watching marathon.  I started a couple of days after the election.  Why?  After so much electoral stress, I needed a juicy relationship drama.  Also, I can’t stand waiting a whole week for the next episode of each of the TV series that I’m currently watching.  I needed a filler (an older series that has run multiple seasons).  In this way, I can engage in marathon watching in order  to fill the one-week, inter-episode gap.

Now, why I chose Private Practice in particular  is a bit more complicated.  First, I was never attracted to follow Addison Montgomery from Seattle to L.A. even though I really like her.  I guess one medical drama was enough for me.  But most importantly, I’ve been really frustrated with Shonda Rhimes and the manner in which she killed off Lexie, then Mark.  So, I didn’t think I would pick up another one of her series.  After all, I’m already watching Grey’s Anatomy and Scandal.

But no one does juicy relationship drama better than Rhimes. Her soap-operish fare is pretty entertaining.  After all, she’s the Aaron Spelling of this generation, so  when my choice  came down between One Tree Hill and Private Practice, I chose the more adult option.

So, here I am in season 4.  Considering that it aired from September 2010 to May 2011, anything that I might say about it is probably old news for you.  But, you’re here now.  You might as well see where this is going.  Here are my 4 major observations about the show so far:

All the characters on this show have a lot of sex, all the time, and usually with each other.  When they are not having sex, they are  talking about how much they need/want it.  But that’s not all, the sex is awesome, even the very first time. It doesn’t matter whether they’re really into the other person or just looking for some sexual release, whether they’re psychologically stunted or bound to a wheelchair paralyzed from the waist down, the sex is always earth-shattering.   If this is a close depiction of what goes on in LA., well, I’m moving there.

After all the bed jumping, Violet who had [great] sex with Sheldon & Peter during the same period is now married to Peter [having great sex], after Addison frees him from a relationship (where the sex was great).  Violet and Peter almost didn’t get married as Violet turned back on her way to the altar.  When Peter comes to see her, he gazes into her eyes while he touches her arms without uttering a word.  This convinces Violet to go ahead with the wedding.  A beautiful scene that is totally negated a few minutes later when Peter tells Addison that he’s never been good at marriage.  Too bad, because that means they’re going to split up, and they’re really good together.

Charlotte and Cooper (who have great sex) are engaged after Charlotte had [great] sex with Sheldon during a break-up with Cooper.  Charlotte is one of the best characters on this show, with an abrasive personality but a bigger heart.  I don’t know how she can make it with warm and fuzzy Cooper, but it’s nice to see how they’re growing together.

Sheldon, whose short, funny appearance belies his sexual prowess isn’t coupled with anyone but should be (apparently his “anatomy” is generous and he knows what to do with it).

As for Addison and Sam they’re having lots of great sex (according to the script), but frankly there’s no chemistry there.  I sometimes read future episode recaps (damn it), so I know that they’re heading for a break-up, even though Sam told Addison he would never hurt her.  Maybe she’s the one that ends up hurting him.

Peter’s wife died in her sleep (he hated her, by the way). Violet was raped in college and much later in life had her baby cut out of her belly by a psycho client.   Charlotte gets raped and badly beaten. William dies (but leaves Naomi a lot of money).  Dell dies after a car accident where Maya could have stayed paralized, could have lost her baby, or both. That means that Betsey loses her dad after having lost her mom, a drug addict.

The most heartbreaking story in the series.  In the episode, “A Better Place to Be,” after Betsey’s aunt drops her off at the practice refusing to keep her, Violet takes her in for a couple of nights.  She then realizes that she wants to adopt her, not only because she feels that she owes Dell and also wants to atone for having abandoned Lucas, but because she has a true connection to Betsey. Peter refuses.  No one else in the practice steps up and Betsey is taken by a social services caseworker.

How could this group of  rich, professional friends, which includes two psychologists, turn away from a little girl who has lost both her parents and has been abandoned by her aunt? How can they turn over to the foster care system the 7-year old daughter of one they used to call a member of their family? After Betsey is taken away, Violet tells them all that they’ve done a bad thing.  I agree.  I don’t know if this storyline will be developed in the future or if it’s over but I don’t see how this would not affect them, especially Violet.   I can’t stop thinking about it.

So that’s it so far.  I might write another Private Practice post if  I think the future storylines are worth it. But, if you don’t see any more Private Practice posts from me, it could be I just decided to enjoy the sex, watching it, that is.  Don’t hold it against me.