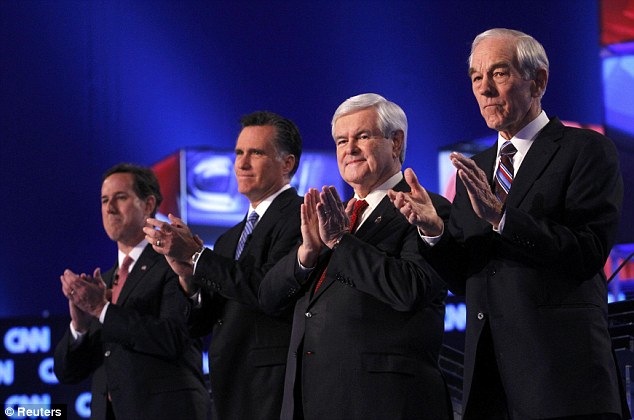 After Super Tuesday, I heard a woman on the news explaining why she had voted for Mitt Romney in Ohio.  She sounded vague and undecided, explaining that she ultimately picked Romney because she liked his sense of calm and confidence.  She felt he would make level-headed decisions if elected.  Huh?

These are personality traits.  What does she think about the issues? Does she care about Santorum’s extreme positions on family and women, Romney’s alarmingly pro-business platform?   What about health care, taxes and foreign policy?  Shouldn’t this stuff outweigh our feelings about how candidates carry themselves on camera?  She may as well have cited her aversion to Santorum’s sweater vests as a reason for her choice.

“It’s not a Mr. America contest!” I found myself snipping at the radio.

Since so many people make voting decisions based on the feel of a speech, the look of a candidate, or the demeanor of  the debaters, candidates rise and fall on the bare measure of charisma, with little reference to the issues.  Why not simply parade them across a stage in formal wear and fake teeth, or swimsuits and sashes?  Then we could forget the arduous months of campaigning and take just one afternoon to study their posture, catch the untimely trip, or detect the inward turn of a toe.

Such superficial “scrutiny” makes all candidates hyper-vulnerable to the political disaster of a one-time media gaffe.  Howard Dean and Michael Dukakis come immediately to mind and, most recently, Rick Perry.  I can think of numerous reasons we should have run that guy out of town.  For one, he wanted to mess with our precious checks and balances by allowing a 2/3 vote in Congress to overrule the Supreme Court.  That flies with the pageant-prone public, but an inopportune brain freeze knocks him out of the race? World peace, you doofus.  The answer was world peace!

I was happy to see Perry go, but still, I don’t like the charisma game.  Sometimes it gets the wrong guy.  A lot of folks didn’t like Al Gore because he was too stiff.  He was a little stiff, but I don’t find much comfort in the idea that when George Bush waged an unnecessary war in Iraq, he probably did so while sitting all relaxed and Texas-casual in his oval office chair.

With the super PACs on board for this year’s election, I know we’re in for more glitz and glamour than ever before.  Who cares about renewable energy, affordable healthcare, a more fair tax system, proven ways to stimulate the economy, the elimination of torture, the death of Bin Laden, and support for progressive family values?  Thank goodness Obama can sing, play basketball, speak publicly, and smile big.