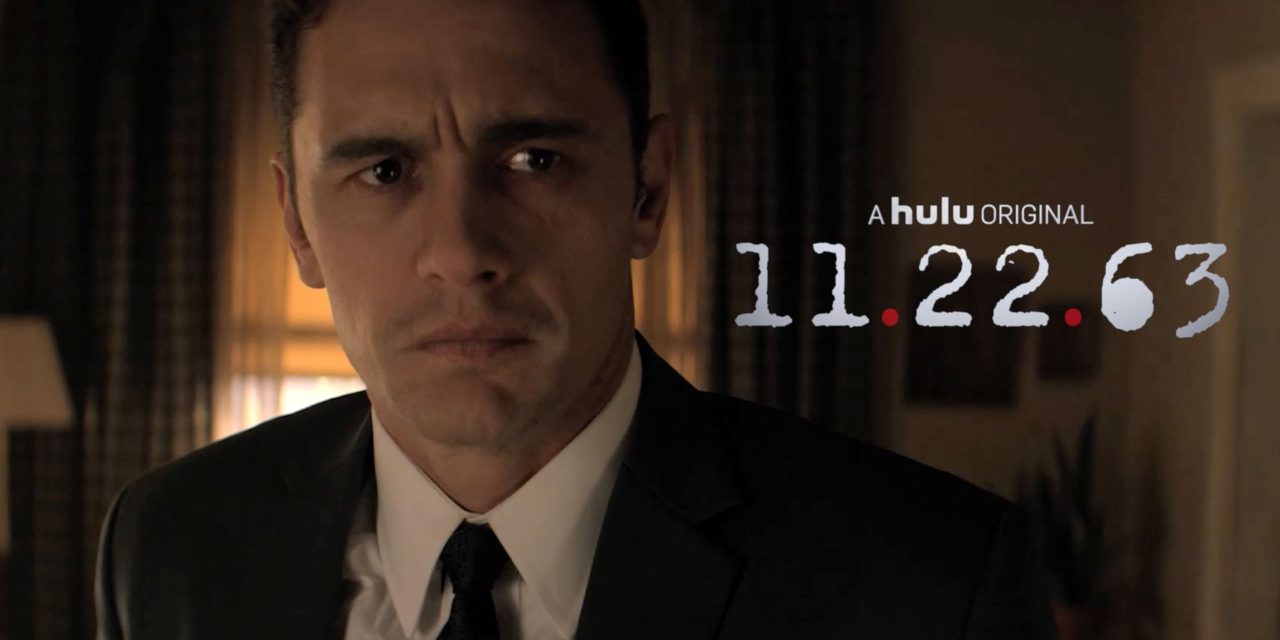 Back in 2012, I read a fantastic book by Stephen King entitled 11/22/63: A Novel. In this non-horror fiction, a man travels back in time to try to stop the assassination of President Kennedy.

Kidding aside, I wanted to watch it because James Franco plays the main character, because J.J. Abrams and Stephen King are executive producers, and because Bridget Carpenter, another executive producer, is a veteran writer of Friday Night Lights, a show that I loved despite it being about high-school football in a small town.

Without further delay, let me just say it: this mini-series is good but it’s not as good as the book.

Cinematography and costuming were outstanding. Watching this series, I finally understood the term “moving pictures,” through beautiful shots of rain falling on cars, smoky bars, family life, and many others. Great care and detailing was given to the characters’ wardrobe. I felt I was back in the 60’s. No, better yet, I felt, I was looking back at the 60’s through a magic mirror.

A much less impressive aspect was the acting. It was ok, but it wasn’t what I expected from such a talented group. I was particularly surprised by Franco’s acting which was sometimes off. For example, a few times his eyes showed flashes of anger when hesitation was what the scene required. That said, Franco’s acting was at its best during the love scenes between his character, Jake, and Sadie. I have very rarely seen such unadulterated look of love on-screen.

The weakest element for me came from the length of the mini-series, which I believe also affected the quality of the writing. 11/22/63 is an almost-900-page novel, where the main character, Jake Epping, suffers through the decision to go back in time and change the course of history. Jake is the novel’s narrator and we get to really know what he thinks and feels about his life back in the past and the enormous task that he has taken on.

In the mini-series, executive producer Bridget Carpenter chose not to have the first person narration. Instead, she takes a minor character from the book, Bill Turcotte, and turns him into Jake’s confidant. I have a problem with this not only because Bill is very far from being confidant material (impulsive, erratic, and foolish) and Jake knows this, but also because of the speed with which Jake reveals to Bill that he has come from the future to save President Kennedy and Bill’s acceptance of this information. This is just not credible. I think that it’s easier to portray a character today believing that someone is traveling from the future than to portray a character in the 1960’s believing that someone is visiting from 2016. To get away with this latter scenario, the story needs time to be properly developed. In my opinion, this mini-series needed to run the usual length of a season, around 22-24 episodes.

All that said, the series still worked because the central idea of “what if the Kennedy assassination was prevented” is a strong premise. It worked because even though we know the story’s ending, we still hope for a different one and we suspensefully wait for it. But, mostly the series worked as a love story between Jake and Sadie with the JFK assassination as the backdrop. This is the complete opposite of the book. Even with all the flaws, however, this too-short mini-series is still better than a full season of Scandal or Revenge.

My recommendation is to read the book, then watch the series, and let me know what you think.