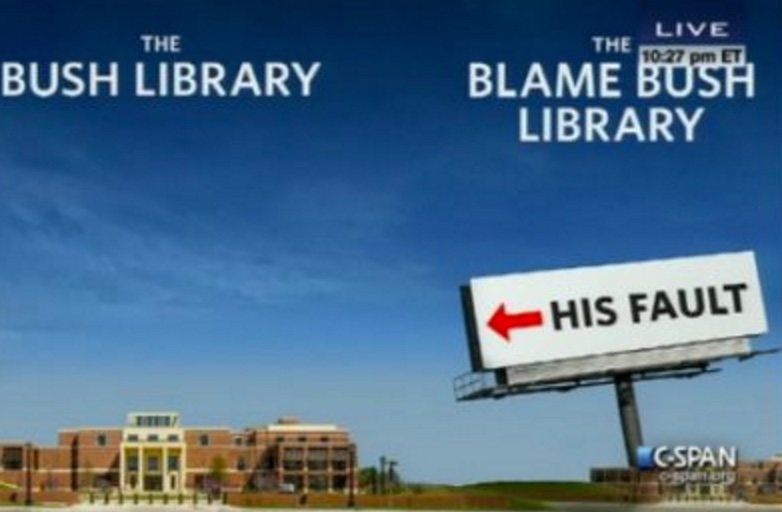 I am writing this post bogged down in hesitation. You see, I’m going to criticize two of the most popular segments of President Obama’s speech at The White House Correspondent Dinner (WHCD). I know that most of you thought that it was awesome (it was), and that this was due to the awesomeness of Comedian-In-Chief President Barack Obama (I agree). But I still can’t shake a nagging feeling.

So, at the risk of upsetting you, I must plunge ahead. As you may know from the “About” section in this blog, I’m very interested in communication, and especially in political messaging. It is with this focus that I ask: Did President Obama laugh at himself too much? I’ll try to make my case:

Yes, George W. Bush is fully to blame and no, not even joking should President Obama imply otherwise.

2. The Obama/Daniel Day Lewis Video:  Of course, it was funny. Of course, it was well done. After all, Steven Spielberg directed it. We see President Obama (pretending to be Day Lewis) putting make-up on, rehearsing saying, “Hello, Ohio” and “I love you back” in front of a mirror, and pretending to put on his ears. This would have been the perfect gag were he no longer President, but it wasn’t the right thing to do for an acting President. Why? because it was not presidential. Call me  traditional, but the presidency demands gravitas, and this video—as much as I hate to say it— made him look like a clown.

I’m focusing on these two examples because I believe that, on the one hand, he gave his opponents more fodder to use against him, and on the other, he opened the door even wider for further disrespect. Already, I am convinced that no other President has been as woefully disrespected as President Obama has been. Remember Joe Wilson yelling, “You lie!”? Remember Arizona Governor Jan Brewer pointing her finger at the President’s face?

That said, I’m willing to concede that, due to all the abuse I have seen being heaped on the President, I’m being hyper sensitive about all of this. President Obama looked like he was having a lot of fun, especially when he was so masterfully throwing zingers at his staunchest conservative foes, like the one on the “drink with McConnell” and the one on Sheldon Adelson’s $100 million anti-Obama campaign.

If he, who has personally lived through all of it, who has been at the receiving end of so many attacks, can continue to be so comfortable in his own skin, maybe I need to loosen up. If no matter what they have thrown at him he succeeded in getting re-elected for a second term, then who am I to judge? After all, time and time again he has proven that he’s not only the coolest guy in the room, but also the smartest.

So, in the end, even if he did laugh at himself too much (for my comfort), you know what they say, “he who laughs last, laughs best.”