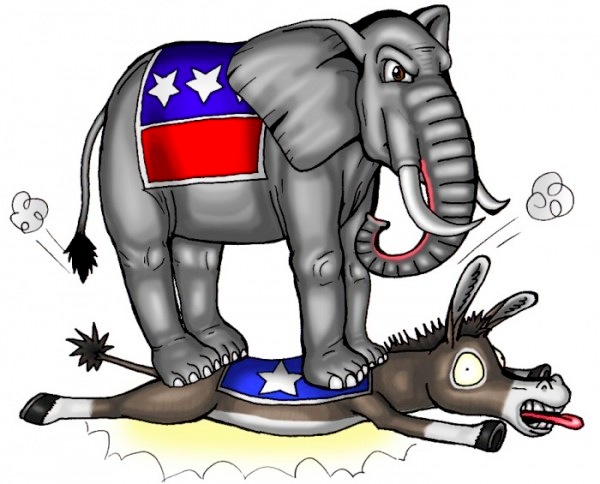 It took me a while to accept him as the Democratic Party’s mascot (see Donkey Chronicles Part I).  I had to go into obscure little sites that lauded donkey attributes.  I had to brainwash myself to focus only on the positive. I had to ignore the fact that most cultures consider the donkey to be a very stupid animal. So what?  What do they really know?

The Donkey is loud.  He’s strong. Not only does he kick ass, he’s an ass that kicks!  I quickly started searching for examples of his “badassness,” you know, so I could show off a bit. Sadly, that’s when I realized that the Democratic party has chosen the donkey to represent it, but IT does not represent the donkey.

Democrats are not loud, they’re too polite for that.   To find loudmouths you need to go over to the Republican Party; it was after all a Republican congressman who yelled “You Lie” to the president of the United States during a televised national speech.  A Democratic politician’s idea of self-preservation is not to stand up and fight for his/her beliefs,  but rather to go with the flow, even when it means starting a war in Iraq that has no reason for being.

As to that hind-leg kick, I never see it. I waited for that kick during the 2000 presidential election.  Our donkey needed to kick that elephant right between the eyes and take what really belonged to him: the presidency!  Again, in 2004, when John Kerry’s war record was so malignantly and falsely distorted, I waited with bated breath for some “badassness” that never came.  More recently, when Mitch O’Connell declared that the Republican Party’s # 1 priority is to make sure that  President Obama only serves one term, where was our ass kicker?.    Frankly, only a jackass would publicly admit to such a mission,  especially at a time when the # 1 priority of both parties should be, say,  the current state of the economy, unemployment, a failing education system, national security…, take your pick.

Why do we keep letting that elephant walk all over us? For 6 months, Republicans trumpeted their mission to lower the deficit, and yet they cornered Obama into extending tax cuts for those making over $250,000 a year.  A move that by all economic studies will be one, if not the most important, factor in greatly expanding the deficit.  That the President had to swallow this bitter pill in order to push through other aspects of his legislative agenda, the repeal of “Don’t Ask, Don’t Tell” and the “START treaty,” is unfortunate but politically acceptable.  What is not acceptable is that once again the Democrats missed a great opportunity to kick ass.  Democrats failed to highlight just how untenable and hypocritical the Republican position is. Once again I waited for the donkey’s kick.  I ended up kicking myself.

I think the donkey has been JACKED!  He could have been a star.  Instead, all he does is find himself wiggling out from under that elephant’s paw! Or, hoof? Whatever, it’s HUGE.

Where’s the kick?  Where’s the proud HEE-HAAWH?  Wait, I think I hear something, it’s far away and hard to decipher, but I can hear it now: it’s the Democratic donkey’s current cry,  not HEE-HAAWH, but UH- OH.