I had plans to write another piece.  Something funny or sarcastic about Republicans and how foolish they are these days. I have so much material from which to draw inspiration. But I cannot. I am heartbroken. For the past couple of days I have an image and a name seared in my memory. The name is Trayvon Martin. The image is the one on this post. 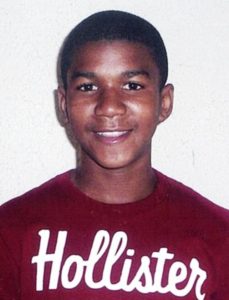 Take a good look at this photo (if you haven’t already).  It says a lot. When I first saw it,  the eyes, the smile, carried one message, “Trayvon Martin, was a good kid.” I also suspected that he was a happy kid. He has the same expression my boys have when I tell them they can have a sleepover, or watch a bit more TV, or that I love them “to infinity and beyond,”  and then I read that one of his teachers said he was “majoring in cheerfulness.” My heart broke into even smaller pieces. After the 9/11 tragedy the French newspaper “Le Monde” ran the headline “We Are All Americans.” At a different level, I feel that Trayvon Martin’s death has touched a national nerve that makes us say, “We are all Trayvon’s parents.” We are mourning the loss of an innocent life, the senselessness of his death, and the horrifying thought that this could happen to our own child.

On my Twitter timeline several avatars now sport a hoodie. In New York,  the “Million Hoodie March” was organized in support of an online petition by Trayvon’s parents to open a criminal investigation into his death. Time reports that 937,065 signatures had been collected one hour after the march (attended by around 1,000 people on Wednesday night). Trayvon’s death has sparked discussions about racism, gun control, Florida’s “Stand Your Ground”  law and even Fox New’s poor news coverage. It might be a small consolation to Trayvon’s parents, but their son’s death, while senseless, is not meaningless.

Someone left a comment on a post saying something to the effect that if this is America’s #1 story at the moment, there is still hope for America. I couldn’t agree more.

Trayvon Martin:  May you rest in peace, and may we not, until in our country: a person is not judged by the color of his/her skin, our gun laws protect our children instead of a constitutional amendment, and common sense and common decency re-enter into our national discourse.