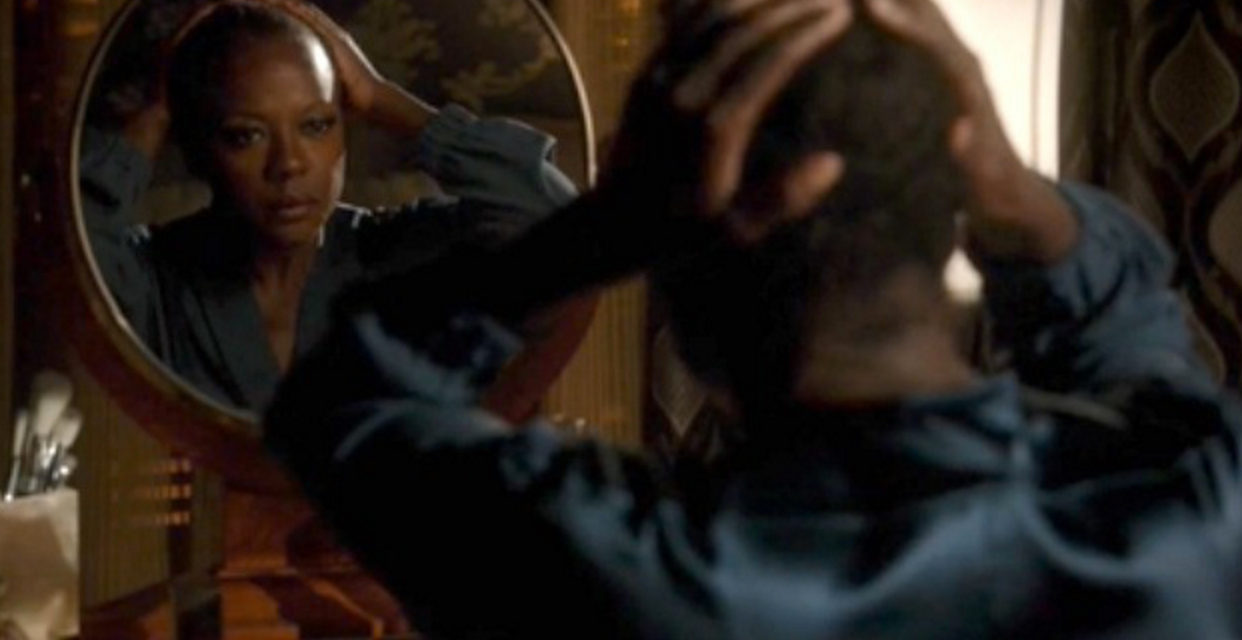 I didn’t think that I would be writing about How To Get Away With Murder (HTGAWM) this quickly after my very brief comment on  My Fall 2014 TV Season. But after watching Let’s Get To Scooping, the show’s 4th episode, I feel compelled to write this post.

HTGAWM hooked me from the pilot episode even though the show has a few flaws. I don’t need to see the coin flip, the twirling cheerleader, the bonfire, the bloodied trophy, and the dead husband ready to be set on fire one more time. I get it, I’m not slow (and those flashbacks are way too fast).

An even bigger flaw is in the casting. First, that of Liza Weil’s in the role of Bonnie Winterbottom. Nothing feels right about this character, starting with her hair style and color. But, worse than that, I feel that I’m watching a grown-up Paris (from Gilmore Girls). According to her character’s bio on ABC she’s supposed to seem “sweet and kind, the perfect counterpart to Annalise, but she will show her claws when you least expect it.” To me, she seems cold and jaded and I’ve already seen her claws too many times to think of her as anything other than bitchy. In fact, I’m starting to think that her acting range is limited to playing mean girls.

Then there’s Charlie Weber in the role of Frank Delfino. He’s supposed to be Annalise’s fixer, a tough guy with a weakness for coeds. It seems that, at present, he has his eyes on Laurel, “the quiet, sensitive idealist who enrolled in law school to learn how to defend the less fortunate.” In their scenes together, Delfino appears more antagonistic than seductive. Could it be that his idea of seduction is hitting the girl over the head?

But enough with the flaws. I want to get to the reason why this fourth episode, Let’s Get To Scooping, cemented my fascination with the show. In the first three episodes, I noticed that the gay kissing scenes between Connor (played by Jack Falahee) and Oliver, the IT Guy, were more explicit than what I’ve seen on network television in the past. I was glad for this. Television is mostly either a reflection of real life or a catalyst for change (think President David Palmer on 24). Chaste mouth kissing for gay couples on TV didn’t fit either position.

The writers on the show must have shared my opinion and then some. Connor’s sex scene with Pax, the ungrateful assistant, was even more explicit than those previously shown with Oliver, as was the comment “he did this thing to my ass that made my eyes water.” But what’s more, it was really sexy. We’re all familiar with straight guys having a thing for watching two women having sex. Well, I’m a straight woman and I found that particular sex scene with two gorgeous, sexy men really hot. But, more importantly, it felt natural. Reading episode recaps, I now know that this is what the writers want, to stop sanitizing gay sex for the network television viewer. They have succeeded, and in the process, with only 4 episodes into the first season, HTGAWM has already left its mark on television history and on pop culture.

However on Let’s Get To Scooping, the writers were not satisfied with just showing a more realistic gay sex scene between two male partners, they also wanted to bring our attention to the issue of female beauty and possibly race in our society.  Annalise Keating’s make-up and wig removal right before she asks her husband, “Why is your penis on a dead girl’s phone?” is one of the most powerful scenes I have ever watched on TV.  By the way, “penis”? Has anyone ever said “penis” with such aplomb on network television?

But back to the wig scene, Viola Davis was simply magnificent. So many questions arise from this scene and so many interpretations can be attached to it. Why does Annalise Keating, a successful, professional black woman, in her late forties/early fifties, feel the need to wear a wig in public? What does it say, if anything, about what she had to endure 20 to 30 years before trying to break through societal barriers that judged straight hair to be good and kinky hair bad?  In other words, was a wig a necessary tool to make her feel less vulnerable and appear less threatening in a world that would notice her hair before her brilliance? How instrumental was her wig in her success?

Or could it be that Annalise’s wig is simply a cosmetic choice? If she were white and wore a wig and eyelashes, we would probably just think that she is vain. But why can’t a black woman wearing a wig also just be vain? She could be, but there’s too much history of racism and discrimination in our country to opt for this simpler possibility without reasonable doubt.

Besides, we cannot judge her wig-wearing in a vacuum. What about Michaela Pratt? The beautiful young black student in Annalise’s team wears her hair long and straight. It’s 2014. Surely, she doesn’t feel the pressure to conform to a white beauty standard, like Annalise did…, or does she? Then, there’s real life. How many successful, famous black women walk around showing their hair à l’Annalise Keating sans wig?

Is it possible that with the stroke of a wig, the show’s writers will get us to talk about race and racism—especially as it pertains to black women— more openly and easily? Perhaps not, but with that one masterful scene they have already succeeded in making us look closer into the mirror and start asking the right questions.

How To Get Away With Murder is getting away with riskier language and riskier scenes to lead us to, on the one hand, accept what is, and on the other, to reject the silence, the non-said that so often prevent us from moving into true and complete acceptance, and all this while it entertains. I, for one, am a fan.